Someone really can't stand the Parma PD, so he make a page mocking them. The Parma PD, having even less of a sense of humor, arrested this guy and charged him with a felony. The jury's decision was a victory for free speech.

As part of the parody of the Parma PD, the following was posted:

And after the blogger's arrest, he posted this: 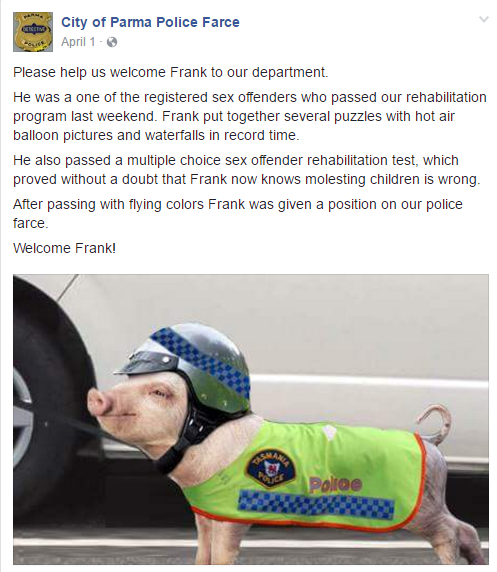 CLEVELAND, Ohio -- The man charged with a felony for making a fake version of the Parma Police Department Facebook page in March was found not guilty Thursday.

Anthony Novak, who faced a felony after being arrested for creating a page mocking the department, walked out of the courtroom free after one day of testimony.

"Today I feel totally relieved," Novak said Friday. "I didn't realize how much stress this was creating in my life until it was over. I was pretty much nervous for five months."

A jury unanimously found that Novak didn't violate the state's disrupting public services law. Police and prosecutors argued that the page led to public confusion that distracted 911 dispatchers who took calls from people confused by the page.

Novak said he intends to sue the police department and Cuyahoga County Prosecutor's Office over the case, claiming they violated his First Amendment rights.

"I absolutely want them to pay for this," Novak said. "The whole ordeal was absolutely ridiculous. They shouldn't be allowed to get away with something like this."

At trial, dispatchers testified that the department's call center received 10 calls about the Facebook page in a 12 hour period after the page went online.

Novak created and posted the fake Facebook page for less than a day in March. He copied the masthead and logo from the department's real Facebook page, then made subtle changes. It gathered fewer than 100 followers before he took it down.

In the about section he replaced the slogan "We know crime" with "We no crime." He copied a job posting on the page and rewrote a section to say "minorities are strongly encouraged not to apply."

Another post touted a law against feeding homeless people, and another advertised that the Parma Police Department would begin offering abortions.

Days later, police arrested him at a corner store in Parma and he was charged with disrupting public service, a fourth-degree felony. He spent three days in county jail and his electronic devices, including a laptop and two video game consoles belonging to both him and his roommate, were seized from his apartment.

Defense Attorney Gary Vick said he focused on the police department's comments about the contents of Novak's posts, a narrative parallel to the department's assertion that the post distracted emergency resources.

"They claimed that those calls disrupted their dispatch function even though the function of dispatch is to take calls and deal with the public," Vick said.

Neither the arrest warrant issued or the Parma police press release announcing Novak's arrest in March focused on any disruption of police activity, Vick said. Instead, the news release touted derogatory comments directed at the police department from others online.

Novak's arrest led to a backlash against the department online. Hundreds posted comments denigrating the police department leadership for its decision to charge Novak in the case.

The department and Cuyahoga County Prosecutor's Office now join a series of public agencies nationwide that have failed at prosecuting people over social media activity.

American Civil Liberties Union Attorney Elizabeth Bonham said she was surprised the case made it as far as it did.

"In terms of a criminal trial, this issue is so clearly protected by the First Amendment that the criminal proceedings shouldn't have even come this far in the first place," Bonham said.

There were never any attempts made to settle the case before trial, Vick said, and Novak never had an interest in settling.
Posted by oncefallendotcom

Donate to the ReFORM Movement